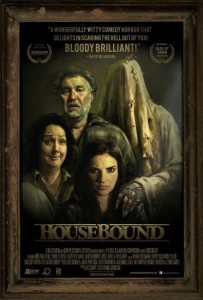 with unwanted, snarky commentary by me, Cecil Laird, in the italics!

I really enjoyed watching the heroine go from a degenerate, petty thief that cares not what she does, into a dutiful daughter that saves her family from an untimely death.

Okay Thor, Odinson.  “…cares not what she does”?  REALLY?

Housebound was written and directed by the talented Garard Johnstone and released September of 2014. It is a triple threat… Comedy, Horror, and Thriller! A combo that is not easily done successfully but Garard NAILED it! From the heroine to the bit characters, each role was perfectly executed!

Well, PERFECTLY…?  I don’t know.  But entertaining, at least.

Kaylie Bucknell, played by Morgana O’reily, is a troubled young youth who is very bad at being a petty theif. So bad that instead of sending her to a reform facility the judge decides she’d be better off spending eight months on house arrest with her Mum to give her a sense of stability.

HA!  THAT really worked out…

It doesn’t take long for you to discover that Kaylie’s childhood home used to be the “Halfway House of Horrors” who’s previous inhabitants haven’t quite left the building!

Caaaaareful…!  No spoilers here!  Save those for the podcast!

I just absolutely loved how this movie developed. It literally goes from comedic, to terrifying, to thriller, and back to comedic. The transitions between the genres were done so smoothly you don’t realize it’s happening until the moment you do.

You know, I was gonna edit that last sentence, but I think I’m just gonna let it breathe.  Poetry like that musn’t be shuffled under the rug.

For instance, I was laughing at the ridiculousness of the not-so-subtle ghost antics, then seconds later goosebumps started to make me shiver!

You’re a complicated broad, you know that?  DEEP.

It’s definitely something you HAVE to check out! I mean how can you really say no to a movie with a troubled youth, an oblivious mother, and a parole officer who hobbies as a ghost hunter? You just can’t say no.

I mean…SOME people certainly can.  And will.

This is all the way a MUST-WATCH!

With that said, this has been another segment of Movie Roulette. So far so good on the movie selections. Can’t wait to see what comes up next! In the meantime keep coming back for podcasts and other horror related news and remember… STAY SCARED!

Want to join the discussion?
Feel free to contribute!