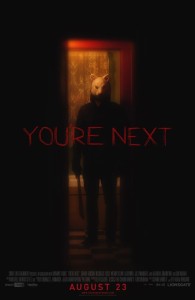 “You’re Next” Review – by Marcia Parker

with Unexpected Review Commentary by me, Cecil Laird, in the bold text!

“You’re Next” was a predictable home invasion film with unpredictable kills.  They waste no time jumping into the sex and violence, and who needs a plot line when you have a badass heroine kicking ass and not caring to take names?

Well, that’s a bit of a simplification, but okay, I’m with you so far, Marcia…

“You’re Next” is a horror/thriller movie directed by Adam Wingard and written by Simon Barret. I was surprised that it’s been available since 2011 and I haven’t heard of it yet.

Yeah, where the hell have YOU been? And what’s it like back there 4 years ago?

Apparently, it has been getting decent reviews across the board, and it DOES have all the right staples to make a great home invasion flick: a hostile family reunion–naturally, located at their conveniently secluded mansion; psycho killers wearing animals masks stalking their prey; and victims who are about as deep as a puddle on a hot Arizona afternoon.

But we don’t watch these films to get a deeper understanding of our humanity, now do we?

My favorite character was Erin, played by Sharni Vinson. She was the hot new grad student girlfriend of one of the brothers from said “family”. Erin thought she was there to meet the parents, but turns out she was there to kick ass!

Who knew?! Oh yeah, anyone that’s ever watched a horror movie.

When the killing begins you think, “ok, cool kill”, but when Erin starts to fight back, THAT’S when you begin to REALLY be entertained! All the way to the final kill, Erin puts the killers to shame–I even giggled out loud at one point!

SPOILER!!!  Wait, giggled at WHAT, you sicko?

There were some issues that I would like to address, however.

Ohhh boy, here we go. You better sit down if you are reading this, Mr. Wingard. And remember, Marcia’s opinions do not reflect that of The Horror Show as a complete entity.

During the initial attack on the family, the director thought it would be really cool to go hand-held. I’ll tell you what, Mr. Director, ten minutes of shaky cam during a non-found footage film is not cool. It did not make the scene more intense or more believable.

Also I can excuse the lack of plot, but I cannot condone bad writing.

DAAAAAMN!!  Look out, Mr. Barret, it’s YOUR turn in the barrel!

The few lines provided during the “meet the parents” phase of the movie were awful and silly. Less would have been more in my opinion.

At the same time it felt as though the writing got better as the movie progressed. I’m not quite sure, but maybe it had something to do with the actors being killed off.

Ouch.  Poor filmmakers.  And they all work SO hard to deliver people like YOU a product you can ENJOY, you ungrateful little…!

…but I actually kinda agree with you.

I don’t want to spoil TOO much of this movie because I truly feel that the kills alone make the film worth watching.

I WOULD like to remind you that the plot is as predictable as it can get…but honestly, you shouldn’t let that stop you.

Yes, especially if you absolutely HATE that kind of thing! <facepalm>

In the end, this is EXACTLY what you would expect from a home invasion movie.

As you’ve mentioned once or twice before, I think.

Just sit back, grab the popcorn, and get ready for some good ol’ fashion murder and mayhem!

Good work, Marcia! It’s like I was in the room watching the movie with you! Really! No, seriously! Uh huh! Nope, not lying at all!

Stay tuned for more Horror Movie Roulette with Marcia Parker, right here on The Horror Show Blog! And if you enjoyed the commentary and would like to see more blogs like this, let us know in the comments below!

Want to join the discussion?
Feel free to contribute!